Back in the USSR: Oleg Klodt transforms a Stalinist-era Moscow building into an English Gastropub

Oleg Klodt has recently completed the transformation of a grand, Stalinist-era 1950s building into Queen V, an English-style gastropub located in the heart of Moscow. Following the brief to combine the character of a British pub with a restaurant serving a wide range of cuisine, the designers have created a comfortable, unpretentious atmosphere that went from drawing-board to opening day in eight months. The premises were previously used as a beauty salon, which meant that a complete reconfiguration incorporating the building’s original load-bearing columns and enormous windows was required.​ ​

The ceilings are extremely tall – so high in fact, that the previous owners had installed an upper floor with wiring and ductwork that ran across the ceiling. Rather than change the layout, Oleg Klodt used it as inspiration for the industrial aspect of the design – drawing attention to the pipes through the addition of light fittings and an illuminated handmade sculpture crafted from pipes by the studio’s in-house artisans. Globe-shaped metal pendants hung above the bar are sympathetic in style, and the staircase rails are an imaginative repurposing of pipes. Antique finished mirrors affixed with bolted galvanised steel to the load-bearing columns help soften the effect of the exposed structural materials.

High-end finishes and bespoke furnishings also help balance the raw edginess. As the team wished to avoid the use of mass-produced items within the interiors, they took an individualised approach by drawing their own designs for all the furniture. Upholstered seating, banquettes, built-in cabinetry and millwork are all customised to designs created by Oleg Klodt.

In tandem with the interiors concept, the studio also developed the restaurant’s brand identity which has been creatively expressed in the centrepiece of the restaurant’s design, the bar. Its 8.5 metre long countertop was crafted in France using a special technique which allowed Queen V’s name and logo to be impressed into the tin metal.

“Some of the concepts we spotted in London pubs have been interpreted here. One example is the tiled floor which runs the length of the bar. This is a feature commonly found in a typical English pub – although the tiles are often so worn that the patterns are difficult to distinguish.”

So while many of the materials in Queen V currently look new, the designers appreciated that the space would develop its own life and gradually acquire a comforting, gently worn charm. Decor such as vases, books, and art have been imported from major London markets to create a place that feels special and unique for Muscovites.

“I love to work on restaurant projects. Designing an interior space for a business requires a separate set of skills than those used when creating a residence, and the budgetary and time constraints are quite different too. Yet these parameters also bring an exciting creative impulse to the project that feels inspirational and satisfying as a designer.” 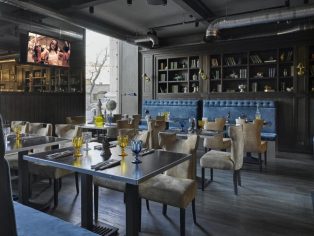 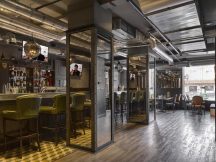 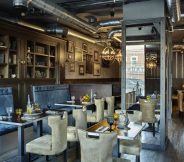