Since its inception by Joseph Reed in Melbourne in 1853, architecture and interior design practice Bates Smart has been responsible for designing some of Australia’s most significant cultural buildings. Acknowledged as the pioneers of modernism in Australia, Bates Smart has delivered projects that have had a positive impact on the city’s fabric, transforming the way people use and inhabit the urban realm including ICI House which is considered Australia’s first skyscraper and is celebrating its 60th anniversary this year and MLC Sydney which turns 80 this year.

As part of the celebrations, Bates Smart has commissioned internationally awarded photographer Tom Roe to capture a selection of the practice’s legacy projects that have contributed to the heritage and progression of Australian cities. These include the State Library of Victoria (Joseph Reed, 1854-70); Wilson Hall at the University of Melbourne (1879), the Royal Exhibition Building (1880), MLC Martin Place, Sydney (Sir Osborn McCutcheon, 1938), MLC North Sydney (1957), ICI House (Sir Osborn McCutcheon, 1958) and Collins Place (1980).

McCutcheon’s desire for efficiency and modernity provided the impetus for Bates Smart’s post-war period of innovation, that still provides inspiration for the practice. Today, Bates Smart is an international practice recognised for its creative solutions to both complex and small projects alike and delivers buildings of enduring quality that are of lasting benefit to their urban context.

Roe from the Isle of Wight, now based in Melbourne, was awarded ‘Sense of Place’ category winner at the Arcaid International Architectural Photography Awards 2017 for his work of Zaha Hadid’s Messner Mountain Museum in Italy. Tom also won this award in 2015 with Geoffrey Bawa’s Kandalama Hotel in Sri Lanka.

Simon Swaney, Director, Bates Smart said 2018 is a significant year for one of Australia’s oldest architectural and interior design firms:

“We are celebrating a long history of designing some of Australia’s most significant cultural landmarks. It seems fitting to mark our 165th anniversary of some of our most important projects with a commission from one of the world’s best young architectural photographers. We were struck by Tom’s perception and strong understanding of materials, structure and composition and how he has captured the lasting meaning of these buildings in our ever-changing skylines.”

“I am extremely honoured to work with Bates Smart on their 165th anniversary project. The practice has had a huge impact on the architectural landscape of Australia over the years and so to photograph a selection of their most iconic work has been a great pleasure.

“The majority of my commissions involve photographing new buildings, so it has made for a really interesting contrast to shoot structures dating back 150 years and photograph them in a more contemporary style. The Royal Exhibition Building and State Library of Victoria were particular highlights due to their grand scale and historical significance.”

A book of Tom Roe’s commission for Bates Smart will be available later in the year. 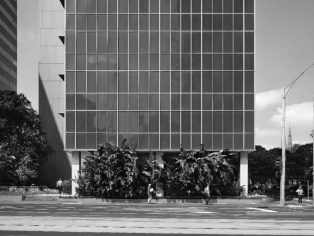