A painting by ADP Chairman Roger FitzGerald is being auctioned to raise money for Marudyan UK, a charity set up by the practice to fund the provision of education facilities for below poverty line children in India.

The auction is taking place in support of a studio-to-studio charity bike ride that staff from ADP undertook last week. The aim of the auction is to raise £3,000 towards an overall target of £20,000 – enough to build a school for 150 children. The school will be economical, constructed from local sustainable materials and easy to adapt to local climatic conditions.

As well as using acrylic paint and black ink, Roger has incorporated textures and collage into the image. This includes pages torn from an old London cycling guide – warning of the perils of potholes and providing advice on how to avoid taxi drivers.

The cycle ride also took place in memory of James Middleton-Stewart one of ADP’s partners who sadly passed away last year. James was instrumental in setting up the UK charity to support the work of the Calcutta Marudyan Society in India. Also depicted in the painting are references to sustainability and contract law, matters on which James led the practice.

To bid for the painting: http://m.givinglive.com/MarudyanUK 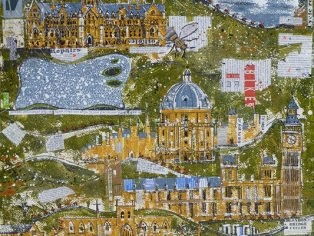