Atkins has been awarded a contract by D R Cruise Port Ltd to provide comprehensive architectural and engineering design services for an expansive new $65 million cruise port development in the Dominican Republic. The two-berth Amber Cove Cruise Center will accommodate up to two Post-Panamax cruise vessels, or 10,000 people, daily.

The site is nestled on the Bay of Maimón on the northern coast of the Dominican Republic near historic Puerto Plata. The new cruise centre, developed by Carnival Corporation, a partner of D R Port Cruise, will serve as the gateway to the province and will seek to increase the north coast’s popularity as a vacation destination.

“Amber Cove will welcome visitors to the country with retail outlets and themed marketplaces along with dining and recreational amenities. The project will feature design themes that echo the cultural and architectural history of the nation, and particularly of the Puerto Plata region. These themes include architectural styles of three distinct periods: the fortified 16th century, the classical-colonial 18th century, and the Victorian late 19th century.”

Atkins is providing complete landside design, comprising architecture and engineering for the project’s 25 buildings, as well as its roadways, landscapes, and plazas. A transportation hub will enable visitors to explore the many interesting points of the historic region.

An Atkins team based in Miami, Florida has supported the Amber Cove development since its earliest planning stages in 2011, including support of the environmental permit application submitted for the site. Previously, Atkins created land use and conceptual plans, site diagrams, and cost estimates that assisted Carnival Corporation to evaluate the project.

The facility is currently advancing through the maritime and landside construction phases and is scheduled to open in anticipation of the 2015 winter season. 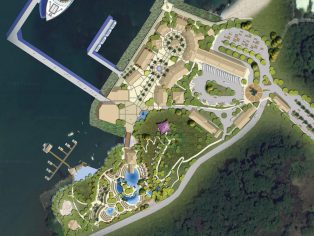