Atkins’ refurbishment of Glasgow Central Station, a Grade A listed building, won the re-use of a listed building award at this year’s Scottish Design Awards.

The award recognises the work of Atkins’ multi-disciplinary team that helped Glasgow Central Station undergo a dramatic transformation to improve its appearance and facilities ahead of the 2014 Commonwealth Games. Working closely with Network Rail, the Glasgow-based team created a design to improve the quality of experience of the 38 million people who pass through the station each year.

Atkins’ team of architects, structural, mechanical and electrical engineers worked to a tight timeframe to transform the station’s main entrances from Union Street, the low level station and the main concourse washrooms in time for the Games. Their design pays homage to the station’s original environment by introducing tall, delicate archway structures and large format gates which feature ornate metal work echoing times gone by.

“Our team helped to breathe new life into Glasgow Central Station’s tired environment while safeguarding its rich history. There was an over reliance on complex signage within the station and there was a desire to simplify the passenger journey and communicate important gateways from a distance through material and form. Although significant in scale, the new arch and gateways are elegantly proportioned and delicately perforated, and laser cut steel plates help belie their structural weight.”

The station, named Station of the Year in 2015 by the European Rail Congress and in 2014 by the National Rail Awards, is the largest in Glasgow and the tenth busiest railway station in Britain. The original station was built by Scottish engineer Sir William Arrol, who was also responsible for Scotland’s iconic Forth and Tay Bridges and London’s Tower Bridge, and first opened on 1 August 1879.

As part of the city’s improvements ahead of the Commonwealth Games, Atkins also worked on upgrades to Glasgow’s Dalmarnock Station, which won a Scottish Design Award for Best Proposed Project in 2012 and a Glasgow Institute of Architecture prize. 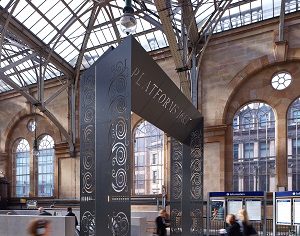