Atkins has completed a plan for the Dongliang River restoration and landscape design which creates a new ecological leisure destination in Chongqing, China and mitigates existing environmental risks such as flooding and poor water quality.

“Development of the Chongqing area meant that the city needed a design strategy for dealing with flood and poor water quality issues affecting the central Dongliang river. This was a heavy engineering task but it had to be handled sensitively as our other prime directive was to ensure the waterway evolved into an attractive urban feature.”

“Our design approach is to integrate engineering and art whilst being sympathetic with the local environment. Our plan is to merge the river and land by providing support facilities for activities such as water sports, fishing and rock climbing. We also aim to establish a cultural waterfront development and a visitor centre along the riparian landscape, ensuring the whole area is walkable and cycle-friendly.”

Chongqing has 29 million inhabitants and it is hoped the enhanced river landscape will also encourage new waves of tourists that will help bring growth and regenerate the surrounding district. It is one of the first projects in China initiated to tackle the major urban problem of water contamination and ecology civilisation which is gaining increasing political and social importance both at the city and Central government level.

Atkins has brought in a multidisciplinary team to work on the project, including water engineers, landscape architects, urban planners and tourism consultants. 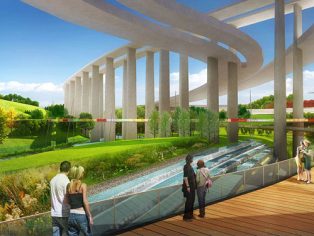