Planning has been granted for a heritage-led residential scheme in the Stroud valleys designed by Assael Architecture. Approved by Stroud District Council, the mixed-use development will be a benchmark scheme in the surrounding area, acting as a catalyst for the regeneration of other disused industrial sites within the 13-mile conservation area that runs along the Stroud valleys.

The project includes the refurbishment and conversion of the Grade II listed Ham Mill and the creation of 100 new homes alongside commercial and community space.  Ham Mill was an operational cloth mill from 1608, producing cloth throughout the 17th, 18th and 19th century. In 1900, it was bought by a carpet manufacturer, who occupied the site until 2000. The mill, and the surrounding industrial space, has remained unoccupied until now.

Following a rigorous planning process, which was subject to extensive consultation focusing on the heritage aspects of the site, the scheme has been given the green light.  The project has been praised by Stroud District Council as a landmark development which struck the right balance between the retention of historic buildings and the exemplary, conscious design of the new-build elements.

Assael’s design seeks to secure the future use of key heritage buildings on the site by introducing new routes to the River Frome and providing a range of landscaped open spaces for residents and the public.

The proposed building layout is based on the concept of yards and alleys derived from those found on the existing footprint. Narrow alleys run laterally east west and open out into two large yards at the entrances of the site.

The five-storey listed Ham Mill will be skilfully restored and converted into 22 homes with over 10,000 sq ft of commercial space at the ground floor. In addition to this, 55 two-storey townhouses, comprising six different house types, and four apartment buildings will be newly built to provide a range of new homes.

The new builds have been thoughtfully designed to be both contemporary and conscious of the industrial features and material palette of the existing heritage buildings. Materials such as the course rubble limestone and Welsh slate roof of the Mill have been incorporated into the design in line with the local context of the Stroud Industrial Heritage Conservation Area.

“The Ham Mill project is a truly unique heritage-led conservation project that will deliver a new residential community built around the Mill buildings and the access to the River Frome. The Grade II listed building at the centre of the development will be carefully renovated to preserve its historic personality as part of the Stroud Valley Conservation Area. The building layout has been inspired by the existing industrial character, concentrating new development to the original warehouse footprints, reforming the yards and alleys, and referencing the industrial materials and details that form the simple architecture. The residential and commercial space will bring life and enterprise back to the site after 17 years of vacancy. We are sure that this project will set a precedent in the area and act as a catalyst for the redevelopment of disused industrial sites along the Stroud valleys.” 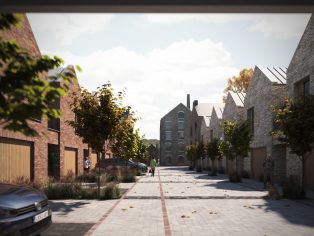 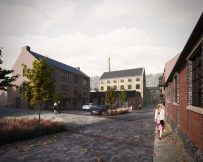