The move follows years of consistent growth for the London-based firm where it’s established a reputation in the industry for design excellence, staff wellbeing and an open work culture. In the past year alone, Assael has employed more staff, increased its fee income to £6.4m, won or been shortlisted for 10 awards for its design work, and raised £24,810 for charity. The practice has already expanded by 10% in the past two months, and is now one of Putney’s biggest local employers.

The new office was officially opened on Tuesday 23rd February by Councillor Ravi Govindia, the Leader of Wandsworth Council, where he praised Putney as a vibrant and growing location for businesses. He said:

“Assael’s investment is a great result for Putney and another vote of confidence for the area’s economy and regeneration programme. This stretch of Upper Richmond Road has been transformed in recent years, bringing new homes, jobs and spending power which is of great benefit to the wider town centre.”

In keeping with its open work culture, Assael consulted with staff at every stage of the office move to make sure that the new location appealed to everyone and that all employees had an opportunity in fortnightly meetings to contribute ideas for the new office. Following consultation, the office was purposefully underdeveloped with vast spaces that employees could adapt and use to complement their work patterns. The customised offices have a studio feel in which everyone can showcase their skills.

The design is symbolic of Assael’s collaborative culture, with ‘work hard’ and ‘play hard’ zones fitted out with traditional desks and state-of-the-art meeting rooms as well as soft-seating pods and cubicles for informal catch ups, iPod/iPad controllable coffee machines and a pool table.

“We’re proud to be recognised as one of the industry’s leading employers, and what better way to reward our staff than with a new and inspiring place for them to work and socialise with the team. We are constantly evolving what we do and responding to what our staff want and care about. We’re looking forward to the forthcoming year in which we hope to build on our success while continuing to campaign for the future generation of architects as well as support and promote our growing industry.” 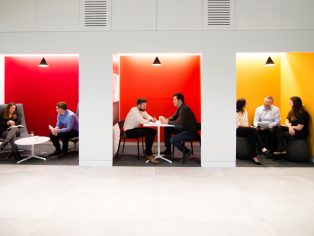