Aspex, one of the UK’s leading architectural ironmongery and doorset companies, has secured two major contracts to supply doorsets to two of the largest high-tech companies in the world.

Aspex has supplied more than 160 doorsets to one of the biggest social media networking platforms, Facebook, and British microchip giant, ARM Holdings.

Launched last year, the Novista Riser system is available with either a timber or steel door leaf and is suitable for a wide variety of projects with single, double, triple, and quadruple combinations available. It can be factory painted to any RAL colour or primed to allow on-site painting for precise colour matching with the adjacent wall.

The doorsets are suitable for locations which require either a very high fire or acoustic rating, and are fire rated to up to FD120 and acoustic rated up to 40dB.

“Our Novista Riser Doorsets are becoming increasingly popular with our customers as we’re able to provide a bespoke solution that will match a company’s individual requirements.

“Facebook and ARM Holdings required a solution that would elegantly fit into their surroundings – our Novista Riser doorsets are ideal as they conceal a door frame within the wall to create a minimalistic look.

“We are delighted to be strengthening our place within the market further and supplying our Novista Riser doorsets to these two major projects. They provide a practical solution and are helping to create the next generation of inspired environments.” 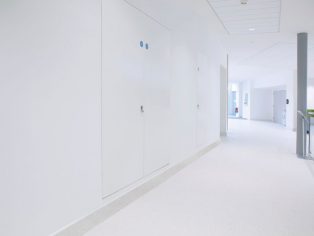