Redrow trainee Ashley Terron is celebrating after being crowned Apprenticeship Champion of the year for the North West – with the next stop the National Apprenticeship Awards finals.

The accolade recognises former apprentices who have made exceptional achievements since completing their qualification and go above and beyond to champion apprenticeships.

“From starting my apprenticeship I have always aspired to be the best. I hold an enormous amount of belief in apprenticeships being the best pathway for many young people leaving school, leading to a long, rewarding and successful career in industry.”

Since his time as an apprentice Ashley’s career has seen a meteoric rise including a gold medal for bricklaying at the WorldSkills International Championships in Leipzig 2013, closely followed by recognition by the Worshipful Company of Tylers and Bricklayers as a Master Craftsman and the British Empire Medal in the Queen’s Birthday list.

Ashley, from Warrington, attended the awards at The Monastry, Manchester, with his girlfriend and colleagues from Redrow, where he is employed as a trainee assistant site manager on the developer’s New Heys development in Liverpool. Ashley has now been entered into the final judging stage. Winners will be announced at the Apprenticeship Awards 2014 national celebration, which will take place during The Skills Show at Birmingham’s NEC, on November 13. Employers of the winners will feature in the acclaimed top 100 Apprenticeship Employers list.

“As a consequence of WorldSkills, creating opportunities of a voice on the national and international stage, I strongly believe that I can be a big part in further promoting apprenticeships to the next generation.”

“Apprenticeships continue to grow in popularity, and events like the National Apprenticeship Awards showcase how beneficial they are to both employers and individuals. It is fast becoming the norm for young people to choose between an Apprenticeship or university as a route to a great career.”

“Ashley is one of our most promising young trainees. His enthusiasm and work ethic is outstanding and he is a very deserving winner of this award. We’re particularly pleased to have Ashley on board as an ambassador for the company and our training schemes. We are committed to developing the skills of young people to ensure a prosperous future for the industry and Ashley is a shining example of the talent and energy trainees can bring to a business.”

One of the UK’s most successful and acclaimed housebuilders, Redrow constructs around 3,500 premium quality family homes a year in prime locations across England and Wales. Around 15% of its employees are trainees and the company earned a place in the top 100 apprentice employers in England in 2013. 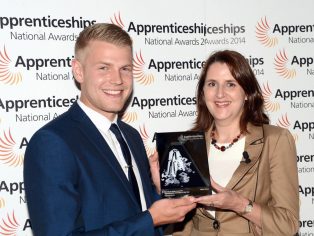