The BREEAM awards recognise only those construction projects that demonstrate ‘excellent’ environmental aspects in their specification, design and construction. An EQUITONE fibre cement facade met this criteria because it can contribute to an A+ rating as defined in the BRE Green Guide to Specification based on generic rating for autoclaved fibre cement single sheet – (Element Ref: 80623042, 806230422, 806230447, 806230450).

Powell Dobson Architects also specified the material because of its aesthetics, which addressed the challenging brief: to deliver a sustainable building whilst working within the constraints of an environment which is suitable for clinical research and trials facilities.

EQUITONE in Charcoal and Cool Grey was the predominant material used on the facade because it created a striking visual appearance. EQUITONE in Sand and Egyptian Blue was chosen for recessed elements within the facade and a number of feature walls.

“We specified EQUITONE materials because the contrasting textures and array of colours on offer allowed us to create a visually striking aesthetic. We were delighted to win the BREEAM award and the use of Marley Eternit’s facade materials played a key role as it is able to achieve an A+ rating as defined in the BRE Green Guide to Specification.”

The EQUITONE facade panels were rivet fixed to a metal framing system at upper levels of the building. Secret fix was used for panels at the lower level to accentuate the sheer, architectural facade that the designers felt suited this high-tech research facility. 100mm of PIR board was used to insulate the walls, which achieved a U-value of 1.1 W/m²K.

For further information on EQUITONE from Marley Eternit just ask ME at: www.equitone.co.uk or call ME on 01283 722588. You can also follow ME on Twitter @MarleyEternit. If it matters to you it matters to us, that’s why with ME it’s all about you. 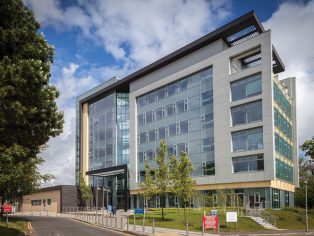