Volunteers ‘put the pieces together’ for new temporary community space.

The weekend of 10- 11 October saw the first community-use WikiHouse being built in the UK. The innovative and sustainable community project is temporary and uses the site of the former Fountainbridge brewery in Edinburgh. The site will be permanently developed by EDI to provide a new canalside development ‘India Quay’.

Headed by the Fountainbridge Canalside Initiative (FCI), and supported by EDI, the WikiHouse is the new community meeting space for the temporary-use projects based at Fountainbridge.

Over the weekend, groups of volunteers donned hi-vis jackets and hard hats to construct the WikiHouse.  Working from an adapted open source design, architect Akiko Kobayashi led volunteers in assembling the prefabricated components of the structure. With wooden mallets, adults and kids alike hammered the wooden pegs into the pre-made holes and slotted on the roof, floor and walls.  With cooperative perseverance, the pieces of the giant wooden jigsaw puzzle gradually fitted into place.

WikiHouse is a system initiated by Architecture 00 (zero, zero) based in London. The WikiHouse approach is now used all across the world and enables people to build their own housing with only basic tools and skills required. The design plans are freely available for people to replicate or customise.

Denise Havard, Community Development Manager at EDI, explained the background to the project:

“We have been working with the meanwhile-use groups supporting and enabling them to deliver what they want on the ground until EDI begins development of the permanent site.  A significant amount of planning has gone in to delivering the project and EDI would like to thank all of the people who have dedicated so much time and enthusiasm into creating this very special structure. I think there will be a lot of other communities in Edinburgh wanting their very own Wikihouse.”

One of the key project organisers, architect Akiko Kobayashi said:

“The main thing I like about the WikiHouse system is many people can be included in building it, people can be fully hands on. Being part of the building process means that people can really understand that the finished building belongs to everyone.”

“The meanwhile-use projects are fantastic. They have brought people from many different backgrounds together.  There has been real interest in this community WikiHouse. Mostly WikiHouses have been constructed in people’s back gardens or for demonstration purposes, but this is for the Fountainbridge community to make their own, so we are delighted to see it take shape at last today.”

Sharon Thomas, a local volunteer who brought her young daughters along to help with the building project, said:

“It’s been a bit depressing having all this empty space and nothing in it. The community garden has been a lovely start and during the Edinburgh International Festival, a circus group used the nearby space for their performances. It’s just good to use the space.”

The Wikihouse is just one of 4 meanwhile uses based at the India Quay site it is hoped that the community spirit that these projects have enhanced will help to create a cohesive community in the new India Quay canalside development.

In the meantime, the WikiHouse will provide a place for the Fountainbridge Canalside Initiative to hold workshops and classes, conversations and gatherings. 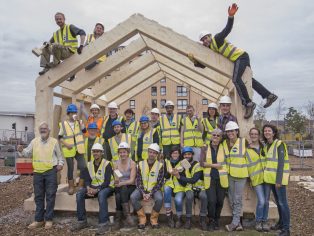 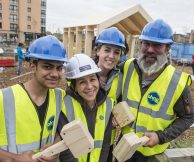