All change for SuDS

In an about turn, the government has announced an alternative approach to implementing SuDS using the planning system amidst a growing realisation that it can deliver far more than just drainage as a fundamental part of development design – as architect and consultant to Interpave Chris Hodson explains

Without doubt, sustainable drainage systems (SuDS) and techniques such as concrete block permeable paving are essential to help fight flooding and pollution – particularly with overloaded sewers, urbanisation and climate change. There is ample research to demonstrate the link between growing urbanisation and flooding, notably the Pitt Review into the summer 2007 floods. Here, over two thirds of the 57,000 homes affected were flooded not by swollen rivers but by surface water runoff or surcharge from overloaded drainage systems.

Act by-passed
The 2010 Flood and Water Management Act – resulting from the Pitt Review – was set to make SuDS mandatory. But a ministerial statement at the end of 2014 confirmed proposals that by-pass the Flood and Water Management Act. Instead, the planning system will form the basis for encouraging SuDS on developments with national and local planning policies. Amended planning guidance – probably based on the latest draft SuDS National Standards – will bolster existing National Planning Policy Framework encouragement for SuDS. The proposed changes will now come into force this spring – applying to schemes of 10 or more houses.

Once implemented, it is proposed that planning conditions, ‘Section 106 Agreements’ or other measures will be used to ensure that SuDS are maintained for the lifetime of the development. The government proposal points out that this should not increase costs, adding: “All the available evidence is that sustainable drainage systems are generally cheaper to build; and maintaining them will be cheaper (or need be no more expensive) than the same cost as is required to maintain conventional drainage at present.”

However, it is important to understand the principles of SuDS to keep costs down and make the most of them. The latest guidance for developers and designers can be found in a Code of Practice, BS 8582:2013. It aims to integrate SuDS with urban design in delivering amenity and community value as well as enhancing landscape and/or townscape character. It also stresses the importance of linking surface water management and development planning from the very start with aims to: • maximise opportunities for using space in a multi-functional way to avoid additional land take • enable water storage and conveyance to form part of the character of the development • provide the greatest opportunity for the drainage system to deliver multiple planning and environmental benefits.

On or near the surface
The Code also looks for permeable surfaces and surface-based conveyance and storage wherever possible. As the latest draft SuDS National Standards Guidance states, SuDS: “should aim to manage surface water within sub-catchments, close to source and at or near surface as reasonably practicable”. This is essential to keep costs down by avoiding the deep excavation and material removal needed both for conventional drainage and overly large, on-site water storage.

Conceptually, a SuDS scheme comprises a ‘management train’ of interconnected features. SuDS manage surface water by attenuation and filtration with the aim of replicating, as closely as possible, the natural drainage from a site before development. That is not to say that all SuDS features have to be vegetated – for example, concrete block permeable paving is a well-used SuDS technique – or that urban projects need to take on a rural character with lower housing densities. But it does mean working with the site characteristics and integration of SuDS within the overall scheme.

Popular with home-buyers
Permeable paving is uniquely placed to help meet the latest requirements. Concrete block paving has proven its popularity with home-buyers as well as planners. This is matched today by the growing choice of permeable paving products available with numerous shapes, styles, colours and finishes – including natural aggregates. They can also be used in conjunction with conventional precast concrete paving products, sharing the same impressive performance, including slip and skid resistance, durability and strength – often with matching colours and finishes.

Permeable paving proves popular with the public for other reasons as well. It can provide completely level surfaces and is well-drained, firm and slip-resistance without the need for cross-falls, channels, gulleys or other interruptions. Rainwater ‘ponding’ is eliminated, reducing the risk of ice forming on the surface and preventing splashing from standing water. But its real strength is an ability to remove water-borne pollution offering the important – and often missed ­– opportunity of a gradual supply of treated water for use within attractive landscape designs enhancing kerb appeal. Water sells homes – now, SuDS and permeable paving can help make the most of it. 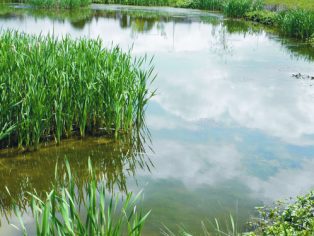