All change at this year’s Network VEKA AGM!

The ever-popular event, this year held in Warwick, attracted more than 240 attendees in the organisation’s 21st year.

The day kicked off with a specially built Business Centre, where members could chat to various supporting companies and affiliate partners about how they could work together for even greater success. As a national organisation, Network VEKA’s partnerships with affiliate companies mean that small, independent member companies can access a host of benefits, such as favourable rates and unique services that they might otherwise be unable to secure.

The afternoon’s speeches began with MD of The VEKA UK Group Dave Jones, who discussed the many ways the Network has grown in recent years, and continues to grow. Finance Director Graham Fitton took the audience through Network VEKA’s accounts over the past year, before Marketing Director Dawn Stockell unveiled some major changes being launched for Network VEKA’s branding going forward. *More to be announced*

Dave Jones rounded off proceedings, describing Network VEKA as the pinnacle of VEKA’s support offering and praising the membership for all their hard work:

“Network VEKA is the jewel in the crown of the VEKA brand portfolio – the brand that stands for trust, not only to us all but also to our consumers… The futures of VEKA and Network VEKA are more entwined than ever before, neither will succeed as fully as we expect without the other. For all the work and investment we have coming through, what remains unchanged is that the most important assets Network VEKA has, are sat in this room.”

“Our membership remains the platform for everything we have and can achieve and, once again, I thank you for your support and your efforts in growing this genuinely unique organisation.”

Dave also took this opportunity to congratulate founder member Goliath Homeworld on celebrating 30 years in business and to thank MD Steve Hancox as he retires from the Network VEKA Advisory Panel, after 20 years of sharing his knowledge and expertise.

A b-oompah evening celebration
This year’s Gala Dinner and Awards was a black-tie event, with a twist. The celebrations kicked off with a Champagne reception, and a Bavarian theme ensured that the atmosphere was fun and the beer was flowing.

This year’s Awards were recategorised for the first time, now being judged on company size rather than region. This meant that members were competing against comparable companies up and down the country, not only those in their own area.

Overall National Winner was Thistle Windows and Conservatories
Aberdeen-based Thistle is no stranger to these prestigious awards, having won ‘Best in Scotland’ an amazing 14 times over the years! This year’s achievement represents the team’s 15th and 16th Awards win, having scooped the prize for their business category and claimed overall ‘Member of the Year’.

“Congratulations to Thistle; a worthy champion. The ‘new look’ categories this year mean that not only has Thistle bagged its 15th trophy, it is also the first to ever win the award for this particular division. This is a fantastic accolade as judging has been made on like-for-like businesses rather than on a regional basis. As all Network VEKA companies undergo constant auditing and review as part of their membership, the overall standard of customer service is exceptionally high, and that has always been at the very core of the Network.”

In with the new
In a year of big changes for the Network, two new members in particular stood out from the competition.

This year’s ‘Best New Member’ Award was jointly won by D&I Window Solutions and North Lakes (NLG) Window Systems; two companies that have each proven their absolute commitment to quality through the many customer satisfaction questionnaires submitted by their customers.

The gift of giving
After the Awards, members enjoyed a delicious dinner and had chance to take part in the Charity Raffle and Auction, as well as donating via envelopes on the tables. The funds raised from these proceedings will be sent to Pendleside Hospice; The VEKA UK Group’s chosen charity for the first half of 2017. A fantastic £3850 was raised on the night.

Lace up your lederhosen and dust off your dancing shoes!
Alternative oompah band ‘The Jäger Maestros’ played live before a disco took revellers through to the early hours.

Karen Lund had this to say about the weekend:

“The Members’ Weekend was a roaring success once again, and this year’s event gave us the opportunity to say a fond farewell to Steve Davis, and thank him for his many years professionally representing the brand.”

“This annual celebration is an important one on the Network’s calendar; it’s a great chance for companies to learn from each other and share ideas and experiences, as well as speak directly to the team and make any suggestions that can help with the continuous evolution of the organisation.”

“The new branding unveiled by our Marketing Director was very well received and I, for one, am very much looking forward to seeing it roll out in the coming weeks.” 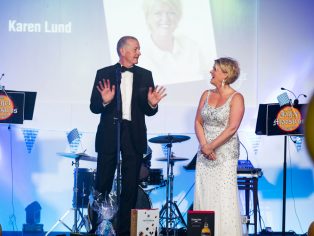 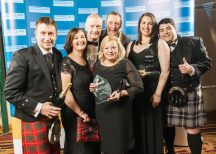 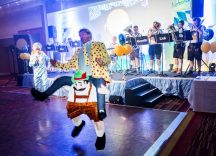