ABA is participating in the Time-Space-Existence exhibition at the Palazzo Mora, along with 100 other established and emerging practices from a range of countries and cultures.

In their exhibition ‘City(e)State’, Alison Brooks Architects documents the evolution of state-sponsored housing architecture as a reflection of the social, economic and political values of the day. The exhibition uncovers qualities found in Britain’s monumental urban housing estates, and how these have become synonymous with economic and social segregation. These are examined in relation to four specific urban paradigms found in a north London neighbourhood: 1890s suburb; 1960s modernist estate; contemporary masterplan; and intensified, ‘ideal’ future.

The practice considers housing design to be the most fundamental form of city-building, constituting urban form, civic space and community identity as well as the intimate space of dwelling. ABA’s own work in housing explores new typologies, identities and hybrid uses as vehicles for urban transformation.

“As catalysts for social diversity and inclusiveness, housing architecture can be reconceived as civic buildings of the everyday.”

“A strategy of proactive council involvement as commissioners and stewards of urban design offers an alternative model for development to purely market-led regeneration.”

The Venice installation will include ABA’s ongoing work with the London Borough of Brent on the regeneration of South Kilburn Estate, one of north London’s largest modernist housing estates. Here, the Council is leading a 15 year masterplan to reintegrate the community, its architecture and public spaces into the fabric of the city. The Council’s plans new projects embed diversity, with a 50/50 mix of social and private housing. Ten London architects have been working in the regeneration including three competition winning schemes by Alison Brooks Architects.

“Our three South Kilburn projects – one complete, one under construction and one planned – recharge streets as a forum for public life framed by higher density, equitable housing. Our work supports the local authority’s renewed commitment to delivering long-term social and urban value.” 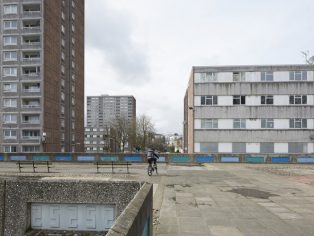