Northamptonshire Rural Housing Association (NRHA) has announced plans to bring more affordable homes to local villages to prevent people from being priced out of the villages in which they’ve been born and bred.

A potential 39 affordable homes, specifically for those with a local connection to the village, are set to be developed across rural Northamptonshire.

Next month will see the completion of 10 new homes in Walgrave, which have been built in partnership with local developer, Whiterock Homes. This is the housing association’s first cross-subsidy scheme in Daventry where any surpluses generated from the four homes for local market sale are being used to subsidise the six affordable properties.

NRHA’s first development in Little Addington will be starting on site in March, bringing two homes for affordable rent and four for shared ownership, along with five for open market sale.

Following Local Housing Needs surveys, which showed community support for more affordable homes in their villages, plans are being submitted for a further three new developments.

A decision is currently being awaited for eight new properties in Nassington. The five homes for affordable rent and three for shared ownership will form phase 3 of the small development.

It is also hoped that planning will be approved for a scheme in Brigstock, comprising one property for affordable rent and five for shared ownership. Work is scheduled to start on site later in the year.

This Summer, plans will be submitted for the second phase in Norton, with a further eight homes proposed.

“Affordable properties are vital to the sustainability of our rural communities. The fact that we are returning to the same villages in Northamptonshire shows that there is still a real need for more affordable homes in these areas, with local people being forced to move away.

“We may only be developing small schemes, but they will each make a big difference in these villages, keeping families and communities together.” 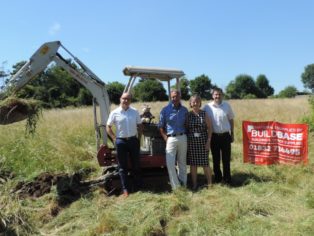 NRHA’s first development in Little Addington will be starting in March.