Meet Roger and Jane Bailey. Roger is a professional photographer and Jane is a sales manager. Roger has built three Potton homes in the past 30 years – and enjoys the self build process more every time.

“My first Potton house was based on a Tudor-style design from Potton’s original Heritage range, which I built in 1984,” says Roger. “Ten years later, when I was married to Jane, we built another Potton house – another Tudor style design which was clad in brick.”

After spotting a plot for sale, with a dilapidated two-bedroom bungalow, the couple were tempted to build again. Once again they turned to Potton to design a timber framed home that would replace an existing property on the site. In return for Roger’s continued loyalty, Potton gifted the couple the plans for their new home.

The Baileys worked with Potton to create a home tailored to suit their lifestyle and plot. It’s three times larger than the original bungalow but just the right size for two people.

“Our children have all grown up so we didn’t need much extra space,” says Jane.

Roger had struggled to find a local builder to undertake his first self build back in 1984. Ten years later, Potton had compiled a register of approved tradesmen, and Roger and Jane selected local builder, Barry Hobbs.

“Barry had emigrated to Portugal, so it was a real shock when he came knocking on our door 14 years later,” says Roger. “He’d moved back to England and had decided to pop in to see us, so I suggested that he should tender for the build and he agreed.”

Potton erected the timber frame structure in just 13 days. Barry then completed the build, including roofing the property in 13,000 handmade clay tiles.

The exterior has feature boarding and a brick plinth. Inside, the Potton post and beam structural timbers are a striking feature.

“We’re certainly not averse to the idea of building again,” says Roger. “If we did do it again, it would definitely be another Potton home. We’ve become like old friends over all this time.” 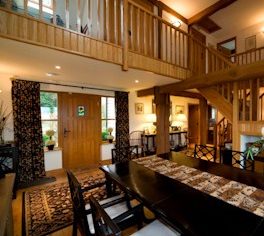 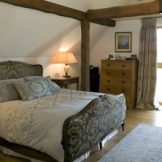 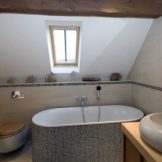