One Park Drive is a residential tower currently being built on a prominent site at the corner of the eastern section of Canary Wharf, formerly known as Wood Wharf. The project is part of seven new neighbourhoods of medium rise and tall buildings that have been masterplanned by architects Allies and Morrison, and which are being developed in a series of phases by the Canary Wharf Group.

Canary Wharf is, in its own right, regarded as one of the UK’s two main financial centres, with the other being the City of London. It is home to some of the country’s tallest buildings, which One Park Drive, at 58 storeys and 215 metres, will rival. Its near neighbour One Canada Square, is the second tallest building in the UK at 236 metres.

The Group is a real-estate giant, owning around half of the property in Canary Wharf. Over the last 10 years, it is believed that the company has constructed more office space in London than any other developer. The group’s remit extends from creating the initial vision, through construction, to the day-to-day management, providing the company with a uniquely long-term perspective.

One Park Drive is the first and defining building of the new residential neighbourhood. The project is a 483-apartment skyscraper pitched at the luxury sector, and is Herzog & de Meuron’s first residential project in the UK. While the building has been designed to fit harmoniously into its surroundings, and certainly befits the prestige of its waterfront location, the cylindrical design provides a strong contrast to the almost exclusively orthogonal, glass-clad buildings across the estate.

Sir George Iacobescu CBE, chairman and CEO of the Canary Wharf Group, outlined the project and its architects’ contribution: “One Park Drive represents the best of Canary Wharf, as our private estate develops into a new destination for London.

“We have collaborated with architects who share our vision for what 21st century urban living can be.

“They have designed a building which is not just a unique piece of architecture but something which will set the standard for everything that follows.”

Swiss firm Herzog & de Meuron’s reputation needs little introduction, the practice having been awarded the Pritzker Prize in 2001. Their portfolio includes landmark projects from Beijing National Stadium to the Walker Art Centre, Minnesota. Founded by senior partners Jacques Herzog and Pierre de Meuron, the firm is probably best known in the UK for the transformation of the Bankside Power Station into the new home of the Tate Modern.

The 21st century has often been called the ‘Age of Spectacle’, and many modern statement buildings are characterised by architects aspiring first and foremost to dazzle observers, with the overarching goal being to create something ‘unique’. This inevitably leads to projects being accused of ‘form over function,’ and questions over whether the design energy has been spent chasing style, rather than considering the end user.

With One Park Drive, which admittedly presents a fascinating composition, Herzog & de Meuron have taken a different approach. The firm’s meticulous attention to detail has led to a building whose external form describes the living spaces within.

Facades sometimes cloak what may be a less than elegantly organised internal structure. The seemingly eccentric hybrid layout of One Park Drive however – tapered apartments with square rooms within a circular envelope – is displayed proudly on the building’s exterior.

Circular towers pose a multitude of challenges to designers, and are therefore rare. The internal grid system achieved here, and the way it responds and interacts with the building’s overall form, is being seen as a possible benchmark for the future of cylindrical buildings.

Meticulous thought has been put into the design of the building, such as the plan grid being rotated 45 degrees from true north to optimise sunlight exposure to each unit. An orthogonal stepped plan protects apartments from cross views, while offering multiple vistas.

In an interview with writer and director of the Design Museum, Deyan Sudjic, project architect Jacques Herzog commented: “What makes it interesting sculpturally is that it has a mix of different apartment sizes.

“We used that mix as an opportunity to express it in the facade. Small apartments produce a different imprint on the facade than larger or medium sizes. It gives the building the light, the scale and the grain and the profile.”

Herzog wanted the building to be “looking all round,” which resulted in a design that avoids the circular perimeter dictating the outlook for residents. “It does not really participate in any given vista,” he explains, “it potentially has interesting views all around.”

The unified exterior of One Park Drive is to be clad in glazed, fluted terracotta. This will make for a far warmer and more tactile facade than is common on buildings of this type. It’s a far cry from the glass sheen characterising many of the surrounding buildings, and helps to signify this is a place for people to live, not work.

Tactility is clearly important to the architect, as Herzog says: “It will feel good to touch. We will use a lot of wood.”

The tower combines three distinct designs, which have been labelled ‘typologies’, stacked on top of each other, and each easily distinguishable on the skyscraper’s exterior. It is envisaged that each typology will “re-examine city living,” providing its own lifestyle characteristics, while together they form a harmonious whole.

Herzog describes how the firm set the development apart from its peers by providing this explicit variety: “Residential high-rises are conventionally characterised by the negative qualities of sameness and too much repetition.

“One Park Drive has three distinct zones offering different types of accommodation that are clearly expressed, offering a sense of individuality in a larger development.”

Levels 2-9 of the building feature the Loft apartments, the first typology. These floors contain some of the largest apartments, with high ceilings and continuous bands of external terraces. Larger units in the Loft section offer extended outdoor space, taking advantage of their proximity to the water and the relative wind shelter afforded by their lower height. Spaces within are “free-flowing,” divided using sliding walls and pivoted screens, and they will have seamless resin floors, “sculptural” bathrooms and curved ceilings.

Next, floors 10-32 form the Cluster apartments at the centre, containing the greatest diversity of apartment types. In this section, floorplates of each storey are mirrored but rotated. Each floor is at a different angle to the floors above and below it, creating a complex but ordered exterior, while still maintaining the clarity of the internal spaces. As the tower’s midriff, the Cluster section is made up of smaller apartments, openly expressing their rectangular forms through the building’s exterior, offset and contrasted against the cylindrical forms above and below. In a similar way, materials used internally will reflect those of the exterior.

The third and final typology is the Bay, covering floors 33-57. The orthogonal floorplates with rectangular rooms again contrast with the external curvature of the building, providing further differentiation from a typical high rise. Each floor rotates on plan in a similar way to the Cluster apartment floors, providing double-height terraces and a dynamic and kinetic spiralling effect.

The design of the Bay apartments is heavily focused on both daylighting and offering sweeping views across the capital. The Bay apartments include many of the larger two and three bedroom units, each apartment enjoying set back terraces. The large bay windows offer extensive views, and the interiors will be luxurious, featuring exposed concrete walls, timber and stone.

In every typology, the geometry of the building has been “expressed without restraint through the facade”. Complexity is created, especially in the Cluster and Bay levels, through the rotation and mirroring of their floorplates. “While providing texture and change in the building’s exterior, each section maintains the cylindrical whole, unifying the tower,” say the architects.

“It’s clearly made for people to stay in and use,” says Herzog. “It has a lot of terraces, the facade is very porous.” It’s not simply “glass in the foreground,” he further explains. “It’s like an inhabited rock.”

The building is distinguished by its terraces forming an inherent part of the curve of the structure, with every apartment having a covered terrace. Rather than an afterthought protruding from the exterior, the outdoor areas provided in each apartment form a part of the whole, created between the apartments’ enclosing walls and the outer edge of each floor plate.

There are a wealth of variations when it comes to the terraces, with many of the Cluster apartments offering two terraces, the Lofts providing expansive wrap-around versions that connect with different interior spaces, and the Bay apartments’ terraces boasting double-height ceilings.

The three exterior typologies are continued on the inside of the apartments, providing each with a distinct style. What all the homes have in common however, is that every facet of the design has been moulded by the architects with the user experience put first and foremost. Usable space is maximised, while each apartment remains “a clear part of the building’s architectural expression”.

Both in the building and externally, a sense of a One Park Drive ‘lifestyle’ has been the guiding principle for the developers, and Canary Wharf Group has integrated a range of amenities to help create this. On the ground floor are a lounge and library, with floor to ceiling glazing, plus a cinema, and on the first floor there is a 20 metre pool, plus gym and spa.

The riverside, surrounding parks, and landscaped gardens, will be maintained by the Canary Wharf Group, creating two distinct levels of public space below the actual ground floor of the building. Canary Wharf is also home to the capital’s largest collection of outdoor public art.

One Park Drive is the first of a brand new neighbourhood the Group is constructing which it hopes will combine urban convenience with exclusivity. Integrated into the development plan are high streets, boutique arcade style ‘Lanes’ and plenty of open, green spaces. There will also be a dedicated doctor’s surgery and a new local primary school.

One Park Drive will serve as a visual gateway to the district, and will be a striking focal point for this corner of the estate. It appears that no expense has been spared by the Canary Wharf Group in making the building the centrepiece of a new neighbourhood for discerning and no doubt affluent buyers. The architects’ expertise has been fully showcased in creating a new type of skyscraper to be the flagship for this new area of Canary Wharf, which will now be called home by thousands of residents as well as a place of work.

The building could also however spark the dawn of a new era in high-rise accommodation, with its variety coupled with tactility of facade. Could it mark the beginning of the end for monolithic glass walls? Whatever, One Park Drive is a landmark in more porous tall buildings, openly playing with as well as celebrating their function.

The architects conclude: “The new tower will be both a symbol and the heart of the new urban quarter, an extension of a dynamic global community and the start of a new, vibrant neighbourhood.” 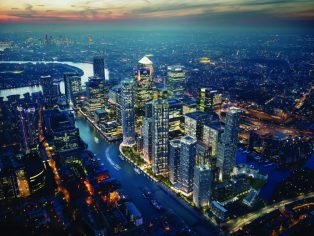