EDDA Architecture designed the head office of Hapag Lloyd which is located in Izmir, Turkey. It was aimed to design the place as an open office, regarding to the wishes and criteria of Y generation. The interior design is fictionalised to make the employees feel special.

In consideration of the new structure established as a result of the merger under the roof of Hapag Lloyd, Hapag Lloyd and UASC Shipping companies, two of the biggest and important companies in the field of Container Marine Transportation, rented an office area of approximately 1000 m² on the office floors of the new premises of Izmir Chamber of Commerce due to  the need for  a larger and more modern office in Izmir that would reflect it’s corporate identity as a Head Office for its developing and growing personnel, in addition to its several offices which operate  across Turkey. During the completion and commissioning of the building, the concept and application projects have been created.

Subsequently, upon having the application area available, the application works have been initiated by establishing the electrical and mechanical installations as per the new plan and designed in compliance with the structure and interior functioning of the building including all working areas, meeting areas, coffee bar and relaxation areas.

In addition to the executive offices and general working areas designed in an open-office style on both floors, the coffee bar considered for the relaxation of the employees when required have been designed in such a way so as way to eliminate the stress experienced in the working environment by taking advantage of the spectacular view, thanks to the location of the office. 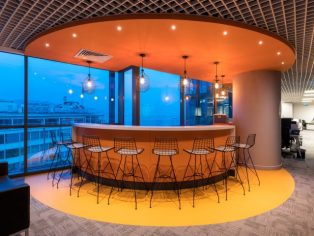