Self-builders strive to create homes that are distinct and appealing, while not ending up with a structure that looks out of place in its surroundings. Marley Eternit looks at why fibre cement weatherboarding is able to retain a timeless appeal, while adding a modern twist to create a contemporary home.

Fibre cement has for some time been recognised as a durable, low maintenance and rot free facade solution. Indeed, self-builders are reluctant to use anything else because of the ongoing maintenance issues associated with some other materials.

One of the most effective uses of fibre cement has been weatherboard cladding, a facade solution that has retained an enduring appeal with homebuilders for centuries. Fibre cements’ ability to replicate the attractive, decorative qualities of timber, while avoiding the ongoing maintenance issues, has lead to its popularity.

In terms of historical buildings, oak and elm were the predominant timbers used for weatherboard until the mid 1800s. The advent of less durable, imported softwood in the 19th century resulted in a need to protect the timber from the element. At around the same time, widespread use of town-gas meant that black-coloured coal tar, a natural protector of timber, became the obvious solution.

As a result many buildings fitted with weather-board adopted a distinctive black appearance. Even now, planning departments often require that new buildings should have black weatherboard to retain the vernacular architecture. The reality, of course, is that the use of black coal tar was a relatively recent development – only with the advent of the town-gas in the 19th century – prior to this the boards were either left untreated or limed washed.

Where lime was used, the addition of pigments allowed the creation of a range of appealing red ochre and bluish hues, which means that pre-19th century weatherboard was much more brightly coloured. Manufacturers of modern fibre cement weatherboard products have responded to this by offering a range of soft colours that reflect what these ‘traditional’ weatherboard buildings would have looked like. Black was not the only colour.

With lime washed buildings, white was also a popular choice and this remains so with many self-builders today. A recent example of where this was used to dramatic effect was a run-down 1960s home on the West Sussex coast. The owner transformed the exterior appearance with fibre cement weatherboard, to create a contemporary Hamptons-style beach house.

Caroline, the owner of the property, said:

“We could see that timber weatherboard would have been an issue this close to the sea. It would have required more regular maintenance than is practical – and with the fibre cement product you don’t even need to paint it because it is supplied in a wide choice of great colours.”

Fibre cement weatherboard is equally as popular with self-builders who are refurbishing more traditional properties, such as a historic 194-year-old, Grade II listed windmill in Kent. The visual appearance of the weatherboard helped create a sympathetic restoration of the building, which has once again become a picturesque landmark in the small town of Sheerness, located on the Isle of Sheppey.

“We used fibre cement weatherboard because it was a cost-effective alternative to timber, and is also insect proof, which increases its longevity and protects the structure from pest damage, such as woodworm. It looks great, too, and has recaptured the original look of the windmill beautifully.”

Fit ‘n’ forget Fibre cement weatherboard can be cut, screwed, nailed or glued just like timber, so there is no need for specialist installation skills. This is an important consideration for self builders looking to take on certain aspects of the project themselves to keep within budget.

In terms of design there are many options available with fibre cement, from the traditional shiplap configuration through to more contemporary vertical boards. The boards can either be overlapped, fitted flush or left with a shadow gap – either way it provides the building with the benefits of a rear ventilated cavity, while creating a design that is up to date.

Fibre cement weatherboard protects buildings against harsh weather conditions by allowing air to continually circulate up through the rear-ventilated cavity, keeping the main structure dry. Preventing rain or moisture reaching the exterior wall of the building protects it from the damaging effects of this continual wetting and drying action.

As self-builders embrace the challenge of creating visually pleasing homes that offer long term low maintenance, more are opting for fibre cement weatherboard. The fact that the material retains a link with historical buildings, which tended to be all self-build, yet provides modern performance and maintenance benefits, means that the material has taken the ordinary weatherboard and made it into something quite extraordinary. 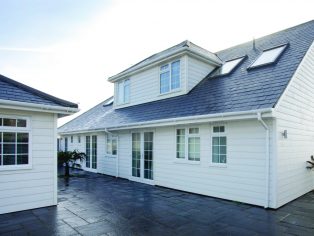