Paige Carter, a female apprentice working for A-Plant, has won the Level 2 regional and national awards of the Construction Plant-hire Association’s (CPA) Stars of the Future Awards. Paige, who works at A-Plant’s Stockton Powered Access Service Centre, has been declared one of the UK’s most promising plant mechanic apprentices working in the construction industry and is the first ever female winner of a Stars of the Future Award.

Jake Ridley, a fellow A-Plant apprentice from the company’s Rotherham Service Centre, was also celebrating after scooping one of the regional CPA Level 3 Stars of the Future Awards and being shortlisted for the national Level 3 award.

The Stars of the Future Awards were presented at a special ceremony at Plantworx 2015 in Bruntingthorpe. Over 300 plant mechanic apprentices from across the country attended the prestigious CPA event and as part of her prize, Paige was presented with a fully-equipped toolkit from Snap-on. As a regional winner, Jake also won a Snap-on student toolkit.

Stars of the Future is a prestigious awards scheme for apprentices in the construction plant hire industry, organised by the CPA in conjunction with the CITB and UK colleges offering plant mechanic apprentice training. Apprentices are assessed throughout the academic year on their work in college and in their work environment and there are separate prize schemes for Level 2 and Level 3 apprentices, at both regional and national level. There is one overall national Level 2 winner and one national Level 3 winner.

“We are absolutely delighted that Paige has won this national award in recognition of her ability and her total commitment to learning and her work. The Stars of the Future scheme not only recognises and rewards outstanding apprentices who possess the capabilities to mark them out as the foundations of the future of the construction plant hire industry, but also potentially its leaders. We are very proud of Paige for winning the regional and national Level 2 award and Jake for winning the regional award and being shortlisted for the national Level 3 award.”

Apprentices play a key role at A-Plant and last year the company won the overall Apprentice Large Employer of the Year Award across the whole of Great Britain at the CITB Managing Agency Apprentice Awards. A-Plant was pitched against companies across the construction sector that employ and train individuals through Apprenticeship Programmes.

A-Plant’s Apprenticeship Programme is one of the most successful and sought after in the hire industry, demonstrated by the fact that A-Plant received over 1,200 applications for the 39 places last year. In 2014, A-Plant invested over £800,000 in the recruitment and training of apprentices and the company estimates that investment this year will be in excess of £1 million. 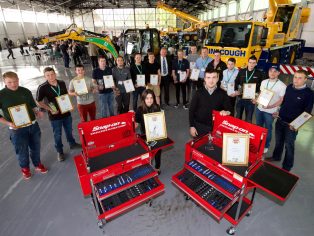