A fresh approach to facade aesthetics

The sustainability and design life of zinc, copper and stainless steel facade and roofing systems have been major drivers affecting their growth. Improved cost effectiveness has also encouraged greater awareness of their technical performance and the scope they provide to create buildings of lasting visual impact. By Andy Denham, business development manager, ALM HM.

Though aluminium continues to be seen as the work horse of facade, rainscreen and roofing design, projects commissioned over the past decade provide ample illustration of the fact that placing aesthetics higher on the design agenda need not be cost-prohibitive. This in turn has given manufacturers the confidence to develop more colours, textures and finishes. Sales of stainless steel, perceived widely as the most expensive metal, were badly affected by the recession but the introduction of ferritic grades has given far greater cost stability and competitiveness. Its reliance at thinner gauges enables facades of considerably lower weight to be built without compromising performance in any way. Even so, by comparison with zinc which can now be seen throughout the UK on projects of immense diversity, sales are still modest. The introduction of contemporary copper alloys has also encouraged a wider spectrum of systems to be considered when previously they would have been discounted. Indeed the colours developed are in many cases now considered to be evocative of the metal concerned.

The introduction of contemporary zinc facade systems has seen the metal specified as interlocking and composite panels, shingles and flat lock tiles. A high proportion of projects continue to be specified in traditional standing seam, but pre-weathered and new colours have boosted use of what is a method proven for both facades and roofs. Bespoke options, such as perforated panels and the introduction of the first engraved zinc in major projects, such as the Stonehenge Visitor Centre have given a further boost to the metal’s resurgence, taking its use in construction to new heights.

Non-ventilated, cold and warm roof construction has become increasingly popular with copper and stainless steel proving ideal for the purpose as they have no susceptibility to underside corrosion. In cold roofs zinc has traditionally required a continuous air space of at least 50mm between the substrate and insulation, but development of a protective underside coating has seen it used widely for compact roof specifications. For warm roof build-ups, the added benefit of fully bonded cellular glass insulation provides the added value, not just of the air gap, but an 18-20mm thickness of plywood.

All of which brings us back to aluminium. Despite the heavy extent to which it is and will doubtless continue to be used, product development has enjoyed a lower profile. Whether this is because of its predominant market share, or because of strong association with projects in which cost is the main driver, is uncertain. The latter is to some extent unfair, but despite what is clearly a wide range of colours, many perceive them as lacking subtlety and would not consider them for their aesthetic value.

The introduction of Alu FX, development of which has been driven by the need for aluminium which can be specified for visual impact, offers what is described as a ‘high end aesthetic on a low budget’. Used in conjunction with a vapour barrier such as Warmfast VB, a life expectancy of up to 60 years is routinely achievable and in addition to black, grey and bronze finishes, oxidised effects have also been created. These rely on use of textured coatings layered in such a way that the smooth surface has a depth which reflects different levels of colour tone. Intended to provide a low-reflective yet lustrous colour which looks like aged or rusting steel, they bring all of the cost and weight benefits for which aluminium is renowned (less than 2kg per m²) with freedom from any problems with run-off. Finishes replicate some of the most popular colours in architecture today, the brushed and textured effects also giving a highly distinctive finish which it is felt will prompt immediate association with aluminium. Coatings are lead, chrome and isophorone-free and offer a Class A1 Fire Classification to EN13501-1. As with other metals, Alu-FX can be installed as a standing seam on vented plywood, in a warm roof on rigid board using fixings and vapour barrier to prevent thermal bridging. It can also be used with cellular glass insulation in buildings with extreme vapour drive, at pitches as low as 3°, for cladding, shingle tiles and flat lock systems. 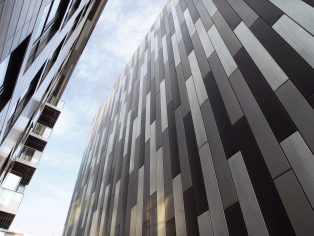