A destination in its own right

Architect Luis Vidal says he wants London Heathrow’s visually impressive Terminal 2 building to be seen as a destination in itself.

That’s a pretty bold ambition for a building with the primary role of moving 20 million people in and out of the country every year, as quickly and effectively as possible.

For Vidal though, airport terminals are never merely functional buildings, they are the 21st century equivalent of cathedrals. He argues that they should be grandly designed places for people to meet, interact and – importantly – enjoy themselves while at the same time being iconic focal points for they cities they serve.

The Barcelona-based architect has a strong track record in this area, as the project director for Terminal 4 of Madrid Barajas Airport, co-author and director of a new international airport for Warsaw and designer of Spain’s much-acclaimed Zaragoza Airport.

Terminal 2 delivers on many levels. It feels and looks spacious without being overpowering and yet, at the same time, it is intuitively easy for passengers to navigate it’s light-filled, user-friendly environments.

The sense that you are ‘somewhere special’ is strongly reinforced by Slipstream, an enormous piece of public art suspended along the whole length of the building’s airy lobby. The 78m-long, shining, flowing sheet-metal sculpture designed by renowned British artist Richard Wilson, unfailingly creates a great sense of occasion. Representing the path of an aerobatic aircraft as it spins and soars through the air, it’s a show-stopper that’s impossible to miss as you arrive or leave the building.

The terminal is to be the home of the Star Alliance, a grouping of 23 of the world’s leading airlines that will migrate all its services over to Terminal 2 by the end of this year, reducing transfer times between flights from 90 plus to 60 minutes.

The original Terminal 2, constructed in 1955, was demolished in 2010 to make way for the new building. Construction has been led by main contractor HETco, a joint venture between Ferrovial Agroman and Laing O’Rourke, appointed by client Heathrow Airport Ltd (HAL).

“We’ve been building Terminal 2 in the heart of a fully operational airport,” explains John Holland-Kaye, development director for HAL. “At the same time we’re improving the surrounding roads and links to transport services.

“To successfully complete the project on time without impacting on every day operations has required detailed planning and collaboration between all the construction partners.”

Looking to the future, neighbouring Terminal 1 will be demolished and Terminal 2 expanded to take its place, creating a super terminal.

Heathrow’s primary objective for the new Terminal 2 is to ensure it really works for passengers, offering an improved travelling experience that makes it a pleasure to use. Early passenger feedback has given a thumbs-up to the design, developed by the project team at Luis Vidal + Architects (LVA).

So, how does Heathrow Terminal 2’s design help to achieve that objective?

Natural flow
The showpiece entrance and exit lobby is roughly the size of the Turbine Hall at the Tate Modern. Walkways from the lobby lead around the sculpture to the check in, bag-drop and security area, which then flow into a giant, sweeping balcony that overlooks the capacious departure hall with its shops, restaurants and bright, airy waiting area.

Travellers can see the aircraft and their departure gates through the 10m-high steel-framed, reinforced blast-proof glass wall at the furthest (eastern) end of the building. From the departure hall passengers can directly access gates, or go through a tunnel to the Grimshaw-designed satellite building (known as T2B) where there are additional gates.

An undulating, steel-framed, wave-shaped roof flows above the whole length of the building, its peaks containing north-facing glazing, bathing the interior in natural light. The ceiling inside features a stretched fabric that reflects and refracts light and presents an aesthetically pleasing visual surface. The roof also features LED mood lighting that changes colour according to the daylight and weather conditions to help keep passengers conformable and calm.

Passengers flying in to Heathrow enter the terminal via a security area, followed by baggage reclaim and then take walkways back up to the lobby and its monumental sculpture.

Vidal is clear about what the LVA design is trying to achieve. “Heathrow is determined to create the best passenger experience – so we designed it around the passenger. It’s a very easy building to read – you can understand it and work your way through it comfortably. At its heart it’s a very simple two-level terminal. You don’t have to change levels all the time and each different area is part of a natural flow.”

That straightforwardness is evident in the check-in area for example, which has a lot of space with clear signage and provides passengers with an intuitive route and a simple process to go through.

To aid passengers, the flooring is a terrazzo in three Heathrow brand tones – lighter for large public areas, darker for retail and an intermediate colour for marking paths.

“Terminal two is a ‘fourth generation’ airport terminal,” says Vidal. “I think the previous generation are essentially shopping malls where, occasionally, a plane takes off. However, people using these buildings are disconnected from their journey with very little information about gates and destinations, and have no sight of their gates.

“We’ve improved way-finding so that the architecture, the roof itself, guides the passenger towards the plane. People can see the aircraft, the gates and the stands as they go air-side, making them feel more relaxed – and that’s better for business.”

Customers approach the departure hall or plaza, as Vidal refers to it, via a majestically wide balcony overlooking it. “Again, from here you can see everything ahead of you, where you are going, the retail, refreshments and waiting area,” explains Vidal. “You decide what you want to do and start to relax and enjoy this space. I like to think we have created a new Covent Garden for London!”

In fact, the departure hall with its retail and refreshment facilities and waiting area, is roughly the same size as the heart of Covent Garden. It’s home to 50 restaurants and shops, including Heston Blumenthal’s Perfectionist’s Cafe and the first John Lewis store to be located at an airport.

Flooded with light
Vidal firmly believes good lighting conditions are essential for an enjoyable passenger experience. “This building is flooded with natural light of the highest quality. Artificial light, too, is very important and ours has a similar quality to daylight.

“At the same time the right balance of colour must be achieved, it cannot be too grey or too powerful. So, for example, when it is cold outside the LED mood lighting is more red, to mimic the light of the sun and help reduce the anxiety of the customers. At night our lighting systems emit light that mimics daylight.”

Achieving good acoustics, he says, is also critical for the success of the design as people find it hard to relax in large areas full of reverberating sound.

The silicon-coated fibre fabric arches on the interior of the ceiling play an effective role in controlling both visual and aural aspects. They reflect natural light and highlight the LED colours. They are micro-perforated (30 per cent of their surface area consists of perforations) to prevent reverberated and echoing sounds that naturally occur in a large space, acting as a baffle to prevent sounds from bouncing back. The fabric is installed in situ and stretched over the roof’s steel framework.

Vidal adds: “At the same time the textures of the building need to be soothing. Even if we cannot physically touch them, we can sense them and it engenders a certain calmness.”

Sustainability
The structure not only has clean lines, it runs clean too. This is the first airport terminal to achieve a BREEAM Excellent rating. Being well glazed it needs less artificial light, and the north-facing roof glazing brings in light without direct sun, minimising solar gain and the need for more air-conditioning. These factors reduce power consumption.

Elsewhere solar-controlled glass prevents heat gain and an overhanging roof shades south-facing windows. The sophisticated lighting control system reduces energy use by switching lights off in parts of the building that are not in use or when daylight is stronger.

Around a fifth of its energy needs come from renewable resources, with power coming from a biomass boiler burning sustainably-sourced wood and 1,000 sq m of photovoltaic panels in the roof.

The building is also designed to be easily upgradeable and modified, enabling new systems and technology to be added to meet future needs.

While it’s good to be green, Vidal recognises that people’s overall impressions of the building will ultimately determine its image and reputation.

“I think it’s important to remember that 40 per cent of passengers using the terminal are in transit, so they’ll never leave this building. For many people it may be the only image they have of London and England.

“That’s why we’ve made Terminal 2 really stand out, to transmit the values of this city and offer people the very best experience of air travel.” 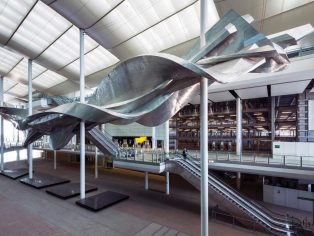 Passenger trials in the new Terminal 2 a

Passenger trials in the new Terminal 2 b