36,000 new homeowners thanks to Right to Buy

New figures show more than 36,000 new homeowners created through the reinvigorated Right to Buy since 2012.

Housing Minister Brandon Lewis said it was proof that the Right to Buy was fulfilling the aspirations of hard-working people, and reaffirmed the government’s commitment to extend the scheme to housing association tenants.

Figures from the 25th June also show that 3,337 new starts and acquisitions have been made since the scheme was reinvigorated in 2012. This means that the additional homes sold in the first year of the scheme are already being replaced on a one for one basis nationally.

“We want to help anyone who works hard and aspires to own their own home to turn their dream into a reality.

“Right to Buy is central to that vision and has already created more than 36,000 homeowners, helping generate over £2.8 billion for more affordable homes. And we are making good on our promise to replace council homes with those sold in the first year of the reinvigorated scheme now being replaced.

“It really is the benchmark of how a ‘one nation government’ can help hard-working people realise their ambitions and that is why we want to extend it to housing association tenants, so that they too have the chance to own their own home.”

Council house building starts are now at a 23 year high and almost twice as many council homes have been built in the last 4 years than from 1997 to 2009. Previously, councils were not encouraged to build new homes from sales receipts and only 1 new council home was built for every 170 Right to Buy sales completed.

Further information
Since 2010, nearly 200,000 people have bought or reserved a new home through government-backed schemes, including Right to Buy.

In the 3 months to March, 3,321 people bought their homes under Right to Buy.

Local authorities received approximately £261 million from Right to Buy sales, 7 percent higher than the £243 million in the same quarter of 2013 to 2014.

Tenants can benefit from a discount of up to £77,900 outside of London and £103,900 in the capital – they need to have been in council housing for 3 years before being eligible for the scheme.

In total, more than 260,000 new affordable homes have been delivered in England since 2010.

The government has outlined an ambitious vision for housing over the next 5 years. This includes extending the Right to Buy, meaning around 1.3 million housing association tenants will get the same home ownership opportunities as council tenants through the extension of Right to Buy.

When the Right to Buy was reinvigorated in 2012, the government committed to replacing nationally every additional home sold as a result of the changes. Local authorities have three years from the sale of each affordable home to replace the property. 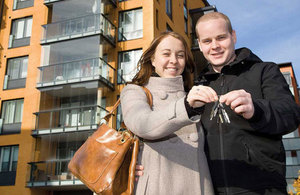