Refugee Camps of the Western Sahara explores the unique urban and architectural tools and design methodologies to deal with the condition of transience and liminality which the Sahrawi population has developed having lived for 40 years in refugee camps in the border zone of south-western Algeria. Instead of seeing the camps as a place of limitation, the Sahrawis have used them pro-actively as a tool of nation building. The camps have become the sites of novel architectural and urban conditions and can be understood as urban laboratories.

The Silver Award went to Hyper Metropolis by Urbanus in the Pearl River Delta 2.0 section. Victoria and Albert Museum’s Unidentified Acts of Design, and the work from Art Center College of Design, Media Design Practices, Now, There: Scenes from the Post-Geographic City, both Thematic Pavilions, won the Bronze Award.

Honorable mentions include: The Collage City 3D section; the outdoor installation 5.344901547362e+133 by Siegrun Appelt; The City that Re-Lives its Memories by WISE Architecture in the Pearl River Delta 2.0 section; and Autonomy and Autodigestion by ANAcycle thinktank Lydia Kallipoliti with Meg Studer and Kyong Kim in the Radical Urbanism section.

The 2015 UABB exhibitions are open to the public from Saturday 5 December 2015. The biennale features over 80 exhibitors from around the world that will together explore the topic “Re-living The City”. The world’s only biennale dedicated to the themes of urbanism and architecture, 2015 UABB takes over the former Dacheng Flour Factory in Shekou and runs until 28 February 2016. 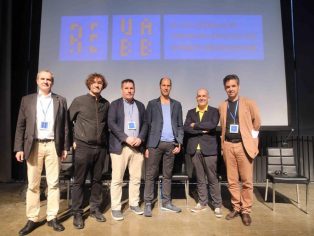