169 new homes in the pipeline at Greendykes South

A new deal between developer The EDI Group and housebuilder Taylor Wimpey is set to regenerate a key brownfield site in Edinburgh with 169 new homes for the capital.

Taylor Wimpey has submitted an application with detailed plans to build a mix of private apartments and terraced and detached houses at Greendykes South near Craigmillar.

In addition to the proposed residential development, the site will feature a small retail unit helping to meet the local needs of existing and future communities.

Work on the seven-acre development, situated in Greendykes between Craigmillar and the Bio-Quarter, could get underway as soon as autumn 2018 if the proposals are approved by the planning authority.

The scheme is part of the £200m+ Craigmillar Masterplan which includes 1800 planned new homes, two thirds of which are completed or under construction, together with a town centre retail development and public realm improvements.

The regeneration has been led by The EDI Group for the past decade, helping to build a thriving community for people to live in the south of the city.

The new Greendykes South proposals will complement the adjacent development at Greendykes North and follows the recent opening of a Lidl supermarket and a Home Bargains store in the Craigmillar town centre development, another vital part of the area’s regeneration project.

Taylor Wimpey is currently completing a nearby development of 160 homes at Edmonstone Walk, off The Wisp, and the new proposals will neatly complement work in this area.

“We’re delighted to be working with The EDI Group to deliver some stunning new homes in this part of Edinburgh.  The new retail facilities on the high street should serve to make this area even more attractive for purchasers, and based on our experience at our nearby Edmonstone Walk development, we anticipate very strong customer demand.

“As well as an impressive range of new homes, our development will provide a range of economic benefits for the local area which includes supporting construction jobs, as well as the attraction of new customers to local businesses.”

Mark Harris, Head of Development at The EDI Group commented:

“It’s fantastic to have a company of Taylor Wimpey’s calibre building on the site’s success with a very attractive scheme, which fits perfectly with our ambitions for Greendykes.

“This development will be the next significant stage of Craigmillar’s regeneration and we’re pleased to be playing our role in helping create attractive places in Edinburgh for people to live and work.” 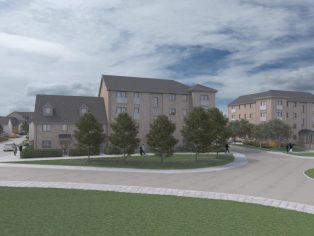