Leading equipment rental company A-Plant is planning the largest ever intake of Apprentices on the company’s popular Apprenticeship Scheme this year. In September, A-Plant will be recruiting 150 new Apprentices across its business, which will bring the total number of A-Plant Apprentices to over 250.

This is a huge increase from the 2014 intake, when 39 new Apprentices were recruited. A-Plant’s Apprenticeship Scheme is one of the most successful and sought after in the hire industry, demonstrated by the fact that A-Plant received over 1,200 applications for the 39 places last year. In 2014, A-Plant won the overall Apprentice Large Employer of the Year Award across the whole of Great Britain at the CITB Managing Agency Apprentice Awards. A-Plant was pitched against companies across the construction sector that employ and train individuals through Apprenticeship Programmes.

“Apprentices are the vital next generation of A-Plant and they enable us to gear our business up for the future, whilst providing employment and progression opportunities for young people across the country. Our structured Apprenticeship Scheme combines class-based learning with practical learning, including a great deal of time spent within the business learning how to put new skills to real use. Our investment in Apprentices has never been higher; in 2014, we invested over £800,000 in the recruitment and training of Apprentices and we anticipate that our investment this year will be in excess of £1 million.”

The company always looks to identify areas within the business where an additional Apprentice stream would benefit recruitment and succession plans. For example, a recent addition to the scheme is the new Mechanical Engineering Apprenticeship Scheme for A-Plant’s PSS Hire business which supplies equipment to the utility, civil engineering and associated sectors. Of the new intake of 150 Apprentices, eight new recruits will be on the new PSS Hire Apprenticeship Scheme.

A-Plant has one of the highest retention rates for Apprentices in the construction sector and is much higher than the industry average of 66% (figures released by UK Government in 2013). 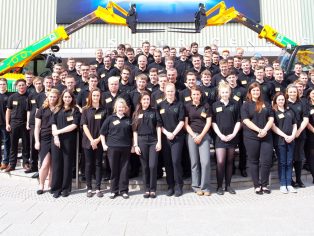